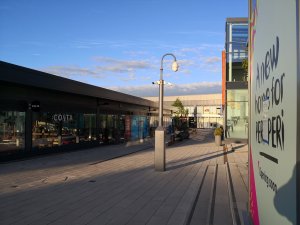 Didcot's new town square has been named following a competition run by South Oxfordshire District Council and owners of the Orchard Centre, Hammerson.

The square in the new extension of the Orchard Centre will be known as "The Core" and was chosen by judges from more than 270 entries from local residents.

In total, 14 people suggested The Core making it the most popular name put forward for the new area. Candice Gray, who is studying printed textile design at Southampton University and lives in Culham, was selected at random from the group of 14 people and, as the lucky winner, she will receive £100 gift voucher to spend at an Orchard Centre shop of her choosing.

Candice Gray, winner of the competition, said: "I am delighted to have won, I cannot believe it. My Mum told me I should enter the competition, but I never thought I would actually win it! As a thank you, I plan to share the prize with my Mum."

Other popular suggestions were connected to Isambard Kingdom Brunel, the power station and various historical names such as Dudecot and Dida. Some entries were tongue-in-cheek with Squarey McSquare Face featuring more than once. Youngsters even got in on the act, with an entry from a pupil from South Moreton County Primary School who suggested Retail Row – a name that features in the hugely popular video game Fortnite Battle Royale.

The judges chose the name because it has links to its past as an apple orchard and its location being at the centre of the science and innovation in the Science Vale.

Cllr Bill Service said: "We were delighted with the amount of imaginative and well thought through entries we received for this unique competition. The final decision was not an easy one to make and we look forward to this being proudly displayed in the town centre for many years to come."

Andrew Berger-North commented: "It is important to encourage participation from local residents across our centres, so it was great to see the engagement and enthusiasm this competition brought. I am sure residents will enjoy spending time in The Core and we have already received lots of positive feedback on the Orchard Centre extension."

Cllr Jackie Billington said: ""It was great to be involved, reading the reasons for the suggested names and whittling it down the final winner. I am very pleased with the winning name, The Core - it was a very popular choice and will be a fitting name to the new Orchard Centre Square."

The new square is located between Costa Coffee and the restaurants at the end of the pedestrian walkway to the Broadway. Hammerson will display new name ready for the official opening of the Orchard Centre later this year.