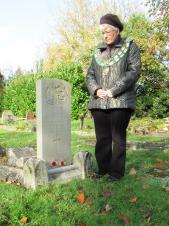 As Remembrance Day is approaching this week, Mayor Eleanor Hards has paid respects to all Commonwealth War Graves in Didcot that are known to us.

Eight lives are remembered in seven graves in Didcot All Saints churchyard, there being one double grave with Cadet Sergeant William Albert Hughes, who was killed when a Wellington bomber crashed near RAF Harwell, and his brother Vivian Stanley Hughes who died in the Radcliffe Infirmary of cardiac failure.