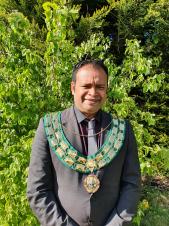 I am proud and honoured to be elected as Mayor of Didcot.

Didcot is changing and I am pleased to be the first Asian to be elected Mayor. This shows the growing diversity in Didcot.

Second is a personal one, my youngest daughter who is 9 years old, has coeliac disease.

I would like to raise as much money as I can for both charities. I look forward to representing Didcot at Civic Events.