The Mayor and Deputy Mayor of Didcot 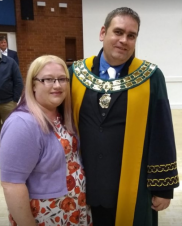 Each year at the Annual Meeting the Council elects a new Mayor and Deputy Mayor to serve for the coming year.

On Monday 13th May Councillor Anthony Dearlove was elected the Mayor for 2019/2020. The Deputy Mayor elected was Councillor Eleanor Hards.

The Mayor chairs Council meetings assisted by the Deputy Mayor in accordance with Standing Orders.

Anthony was born in Oxford in 1982 and has lived in Didcot his entire life.

Anthony works in Sales and has spent the last 6 years working for a local independent business in Didcot.

Anthony and his partner Selina have been together for 14 years. They have an 11 year old Daughter who also attends school in Didcot.

Anthony has chosen two charities to support over his year as Mayor, one local and one national.

Secret Santa 365 is an independent not for profit charity. Founded in 2012 it has helped thousands of sick and vulnerable people.

Make-A-Wish UK is a charity who create life changing wishes for children with critical illnesses.

Follow the link above or email us at events@didcot.gov.uk for more information.

Christmas Opening Hours - Didcot Town Council will be closing today at mid-day and will be re-opening at 9am on 2nd January 2020. We would like to take this opportunity to wish you all a very Merry Christmas and a happy New Year! bit.ly/2PTGA15

General Election Thursday 12th December polling station update! - There has been some confusion as to the location of the polling station for the All Saints Ward in Didcot. This is just to confirm that the Civic Hall is not closed and is a polling stati... bit.ly/2PtWbmk