On Friday the residents of Didcot joined with the rest of the country to mark the 75th anniversary of Victory in Europe (VE) Day.

The celebrations were very different from those we had all originally planned and those we had to mark the 50th anniversary. However, I hope people were able to take part with their neighbours in something they will remember in years to come as they gave thanks for the sacrifice of those who gave up so much.

Although it was not possible to have a mass gathering at the town war memorial near the Civic Hall, the Deputy Mayor and I met there (suitably distanced) to observe the two-minute silence at 11am.

Later in the day I stood in our bunting-decorated garden with my husband to share the "Nation's Toast". I have heard from several people of parties in (individual) front gardens and communal singing. I hope everyone had a good time but it was also a solemn occasion. I think it is difficult for those of us born after the war ended to imagine just what it must have been like for those who were involved in it.

We now have our own challenges to face, though at a different level. One of these is to keep safe the remaining members of that older generation. 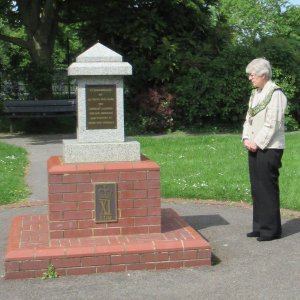