WHAT IS VE DAY?

VE Day stands for Victory in Europe Day which took place on Tuesday 8th May 1945.

VE Day was extremely memorable to all those who witnessed it. It meant an end to nearly six years of a war that had cost the lives of millions; had destroyed homes, families, and cities; and had brought huge suffering and privations to the populations of entire countries.

Millions of people rejoiced in the news that Germany had surrendered, relieved that the intense strain of total war was finally over. In towns and cities across the world, people marked the victory with street parties, dancing and singing.

But it was not the end of the conflict, nor was it an end to the impact the war had on people. The war against Japan did not end until August 1945, and the political, social and economic repercussions of the Second World War were felt long after Germany and Japan surrendered.

Although the official day to celebrate is May 8th, many could not wait and festivities began as soon as they heard the news on May 7th 1945.

Colourful bunting and flags soon lined the streets of villages, towns and cities across Britain. Bonfires were lit, the pubs were full of revellers and people danced in the streets.

Various events were organised to mark the occasion, including parades, thanksgiving services and street parties. St Paul's Cathedral held ten consecutive services giving thanks for peace, each one attended by thousands of people. 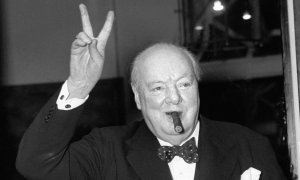 At 3pm on VE Day, Churchill made a national radio broadcast to announce the news that the war had ended in Europe – but he included a note of caution, saying:

'We may allow ourselves a brief period of rejoicing; but let us not forget for a moment the toil and efforts that lie ahead.'

Later on, Churchill appeared on the balcony of the Ministry of Health building in central London and gave an impromptu speech. Huge, cheering crowds gathered below and he declared, 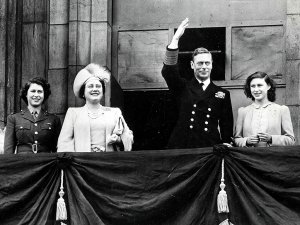 The Royal Family were also present during the celebrations. Huge numbers of people gathered outside Buckingham Palace, where King George VI, Queen Elizabeth and their daughters, Princess Elizabeth and Princess Margaret appeared on the balcony to wave to the cheering crowds.

The future monarch, Princess Elizabeth, and her sister Margaret were allowed to leave the palace and take part anonymously in the party-like atmosphere. Princess Elizabeth later recalled, 'We stood outside and shouted, "We want the King"… I think it was one of the most memorable nights of my life.'